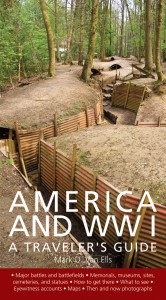 “As we reach the centennial of what Europe calls the Great War, World War I, we all need to gain insight into that war. It was the war that set up all the other wars of the twentieth century. Mark D. Van Ells’s book is a must-read experience. It is invaluable in learning the unmistakable lessons of history.”
U.S. Senator Max Cleland (Ret.)

“On the 100th anniversary of World War I, Van Ells … contributes a different perspective. This title is part travel guide but more a comprehensive history book….  Recommended for academic readers as well as history buffs….”
Library Journal

“Rich descriptions of scenes from WWI and present-day areas of interest for historians and travelers make this somber guide intriguing…. Part instruction and part tourism—a complementary combination—this vivid and often graphic book ensnares the queasy traveler then provides a productive trip through its pages…. Van Ells offers factual data like a journalist but explains martial reasoning like a teacher [and] delivers a powerful evaluation of the American doughboys.”
Foreword Reviews

“A fascinating book that tells the forgotten stories of the American soldiers who went overseas in the bloodiest war the world had ever seen.”
Rick Steves

“Really a treasure….  Whether you travel or not, get this book.  It’s a great read.”
OnTravel Radio

“An excellent book that skillfully executes the difficult task of combining the two genres of historical narrative and travel guide.”
Military Review

“Van Ells performed diligent work in researching and ferreting out all these monuments and points of interest, both great and small. He deserves commendation.”
Worldwar1.com

“The 2014 centennial of the assassination of Archduke Franz Ferdinand of Austria and the beginning of World War I has been marked by ceremony as well as a small surge in related publications. A unique addition is Van Ells’ guide, which provides cultural and historical context for America’s part in the Great War, and documents the paths of, and memorials to, the Doughboys who went off to fight in Europe….  This volume supplements the many existing battlefield guides with its commentary on the little-known memorials in small towns and villages in both the U.S. and Europe, which honor the sacrifices of America’s Doughboys.”
Historical Novel Society

“Reliable [and] useful…  He deserves credit for steering clear of the legends and propaganda that still infect many modern narratives.”
MHQ: The Quarterly Journal of Military History

“I learned something new on virtually every page of this book.”
amateurtraveler.com

“A thorough guide to a war even Baby Boomers don’t know much about.”
Rudy Maxa