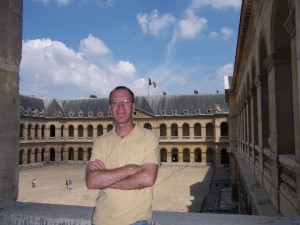 Mark D. Van Ells is Professor of History at Queensborough Community College of the City University of New York. He received his Ph.D. in History from the University of Wisconsin – Madison in 1999, and is a native of the Badger State.  Prior to his position at Queensborough, he taught for Mt. Senario College and the University of Wisconsin – Platteville.  Dr. Van Ells also served as Archivist/Historian at the Wisconsin Veterans Museum in Madison from 1994 to 1998.  Among his duties at the museum was the conduct of the Wisconsin Veterans Oral History Program, in which he interviewed nearly 200 veterans who served in conflicts ranging from World War I to Somalia.  His research specialties include the cultural history of U.S. military, immigration and ethnicity, World War II, and popular culture.

Mark writes scholarly works as well as books and articles for general audiences on history and travel.  His books include To Hear Only Thunder Again: America’s World War II Veterans Come Home (2001), a study of veteran readjustment following the Second World War, and Wisconsin (2009), a traveler’s guide to the Badger State and its historic sites, part of Interlink Books’ acclaimed “On-The-Road Histories” series. Wisconsin was a finalist for Foreword Magazine’s IndieFab Award for Book of the Year in the Travel Guide category in 2009.  His travel articles on historic places have appeared in numerous periodicals, among them America in WWII, Military History, Naval History, Stars & Stripes, and World War II. Mark’s latest book is A Postcard View of Hell: One Doughboy’s Souvenir Album of the First World War (co-written with Frank Jacob), and he is currently writing a history of the 32nd Infantry Division during World War II for the Wisconsin Historical Society Press.